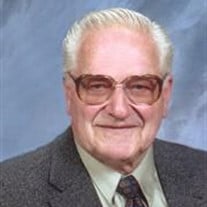 Robert J. Raynor was born on March 5, 1935, in Freeport Hospital, Freeport, N.Y. and died September 13, 2014. His parents were John Henry Raynor, a Freeport motorcycle policeman and Mary Susan (Marino) Raynor of Merrick. He was a direct descendant of Edward Raynor, one of the first settlers, c. 1659, in the area of Raynor South, later called Raynortown and, finally, in 1853, renamed Freeport. Mr. Raynor was an alumnus of the Archer Street Elementary School and graduated from Freeport High School in the class of 1953. He attended the Music School at Fredonia and Ithaca, N.Y., and served in the Army Reserve, 77th Division. He worked as a music teacher, audio-visual technician, retail salesperson, owner and director of the Steinmetz Music Studios and, for more than 20 years, glazier, craftsman, and salesman in the family business Raynor's Glass Works. He was a charter member of the Freeport Historical Society and served as its 2nd president, vice president, trustee and curator, and presently as the Director of Extension Services; vice chairperson of the 75th Freeport, NY Anniversary Celebration in 1967; chairperson of the 95th Anniversary Celebration "Parade of History" and managing director of the 100th Anniversary Celebration in 1992. He was director of Freeport's Bicentennial celebrations in 1976 and 1983, which included the Yorktown Ball. He also was one of the founders of the Freeport Landmarks Commission. Mr. Raynor served as president of COMBO (Alumni of the Freeport High School Band and Orchestra) and co-director of their Reunion Concerts in Freeport in 1974, 1978, 1984 and 1988 which established a music education award from COMBO that is given yearly to a Freeport High School student. Additionally, he has been director, since 1965, of the Street Band Preservation Society Marching Band, was the first director of the Old Bethpage Village Brass Band, and was founder of the Long Island Trumpet Choir at Freeport. Mr. Raynor founded the Great South Bay Model Railroad Club in 1980 at Freeport, was a charter member and first president (1993) of the Raynor Family Association, and a board member of the Long Island Wireless Historical Society. He also held a ham radio license. He was a member of the Freeport United Methodist Church, where he had served faithfully in many capacities. He also was a member of the Freeport Community Band, The Little Theatre Orchestra, Senior Pops Orchestra, Island Symphony Orchestra, Seaford Community Band, and Long Island N-Trak Railroad Club. He is survived by his wife, Jeanne C. Raynor, four daughters, Carole Raynor Neidig, Beverly Raynor, Susan Licata, Judy Follo, and eight grandchildren.; sister, Elizabeth Mary Ploth and brother, John Henry Raynor.

The family of Robert J. Raynor created this Life Tributes page to make it easy to share your memories.

Send flowers to the Raynor family.