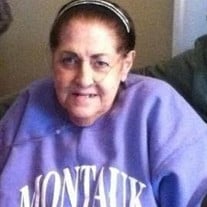 Rita Ann (McGivney) Safey, 77, passed away on November 30, 2015 after a long illness. Rita was predeceased by her husband David Lee Safey, parents Alice (San Dominick) and John McGivney Sr., sister Eva Probst and brother John McGivney Jr.. She is survived by her daughter Marie Molese (Michael and his daughters Haley and Paige), brother-in-law Gus (Wanda) Probst, niece Robin Maderich, nephews Bob (Roberta) Probst and Ron (Linda) Probst, grand-nephews Derek, Michael and Mark Maderich, grand-nieces Andrea Probst Alicea and Rachel Probst-Carlson (Jason), a great grand-nephew Cohen, as well as cousins, friends and extended family. Any discussion of family would be incomplete without mention of her three surrogate sons: Paul (Irene) Hubbard, Bob (Liz) Papesca, and Dan Heintz. As testimony to their nature, Rita and Dave opened their home to "the boys" when he was their supervising officer in the Coast Guard and thought they deserved bedrooms, not barracks. They quickly became part of the family forever. The middle child of a longshoreman and a homemaker/playground supervisor for NYC, Rita was born and raised in Red Hook, Brooklyn. She met Dave on a blind date when his ship was in port in NY and they quickly fell in love. Rita worked as a telephone operator, manager of Majors Department Store In downtown Brooklyn, and then for many years as head cashier for Rainbow/O'Neill Dairies which merged with Tuscan Milk. The family moved to Maspeth, Queens in the early 60's and spent 36 years there before moving to the Kissena Park section of Flushing, and then to New Hyde Park. A memorial mass will be held on Saturday, December 5, 2015, at 10 am at St. Stanislaus Kostka Church, 57-15 61st Street (corner of Maspeth Avenue), Maspeth, NY 11378. Cremation Services were Private. In lieu of flowers, donations to the Coast Guard Foundation would be greatly appreciated (http://www.coastguardfoundation.org)

The family of Rita Ann Safey created this Life Tributes page to make it easy to share your memories.

Send flowers to the Safey family.