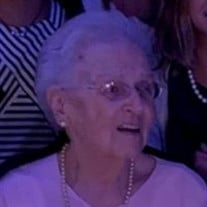 In Lieu of flowers please make donations in memory of Margaret "Peggy" Grupski to - St. Joseph's Indian School PO Box 300 Chamberlain SD 57325-9919 https://give.stjo.org/donate Sacred Heart Southern Missions 6050 Highway 161 N walls, MS 38686 https://secure.shsm.org Margaret “Peggy” (nee Culkin) Grupski of Freeport, NY passed away on December 19th 2021, peacefully in her sleep at the age 91. The only daughter of the late Anne (nee McVicar) and Thomas Culkin, Sr., she was a devout Roman Catholic born and raised in Belle Harbor, Queens, NY where she was a parishioner of the Church of Saint Francis de Sales. She graduated from St. Brendan’s High School in Brooklyn, NY. Known as Peggy to her family and friends, she will be remembered for devoting her life to her family. After marrying her beloved husband, the late Thomas Grupski, Sr., they settled in Freeport in 1953. It was in Freeport where they raised their family and became parishioners of Our Holy Redeemer Church. Survivors include her children Diane of Hauppauge, NY; Thomas Grupski, Jr. and his wife Jill of Millersville, MD; Marianne Grupski of Freeport; Donald Grupski and his wife Annemarie of Massapequa, NY; Margaret Mary Grupski of Freeport; Jean Grupski of Freeport; and Robert Grupski and his wife Iris of Charlotte, NC; her son-in-law Stephen Ottaka; and her sister-in-law Lorraine Culkin. She was the proud grandmother of nine, all who survive her, Jason Mackie; Kristin Klima and her husband Stephen; Allison Grupski Oliver and her husband Justin; Karen Brennan and her husband Michael; Mattia Semedo and her husband Kenny; Katarina Prince and her husband Dylan; Emily Grupski, Donald Grupski, Jr. and Joseph Grupski; and great-grandmother of three, Brooke Klima; Paige Klima; and Jack Brennan. Peggy was also blessed with many wonderful nieces and nephews. She was predeceased by her daughters Nancy Grupski and Irene Ottaka and her brothers Charles Culkin, Thomas Culkin, Jr., Gerard Culkin and Donald Culkin. Reposing at Hungerford & Clark Funeral Home 110 Pine St. Freeport N.Y. 11520 (Corner South Ocean Avenue) on Tuesday from 2pm-5pm & 7pm-9pm. A Funeral Mass will be held on Wednesday at Our Holy Redeemer Roman Catholic Church in Freeport at 9:30am. Cremation will be private.

The family of Margaret "Peggy" Grupski created this Life Tributes page to make it easy to share your memories.

In Lieu of flowers please make donations in memory of Margaret...

Send flowers to the Grupski family.